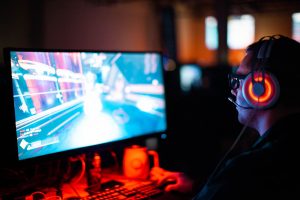 What are the Symptoms of Video Game Vision Syndrome?

Video game vision syndrome is a combination of eye and vision issues that include, but not limited to eye fatigue and eye strain caused by overexposure to video games, which subsequently leads to neck and shoulder pain, headache, and blurry vision.

Video game vision syndrome is a modern-world syndrome that is caused by mobile screens like smartphones and tablets. As screens became widely accessible, so did video games.

Video games require you to commit a significant amount of time to complete it, and wanting to achieve new high scores will not help with the situation, as it leads to prolonged gameplay. Prolonged gameplay—the leading cause of this syndrome—without sufficient breaks can cause eye fatigue and eye strain, causing video game vision syndrome in the long run. Don’t be alarmed, but this applies to adults and children alike.

Is The Prevention Of Video Game Vision Syndrome Possible?

Practice self-control. Reducing your playtime counteracts the leading cause of this syndrome. The key is to start from young, and this also applies to those with children. We often see children being glued to their parents’ smartphones for long hours, and having video game vision syndrome at such a young age is devastating. Imposing a little restriction can go a long way.

Just like any other activity, prolonged usage will cause fatigue. Adopting the practice of taking frequent breaks will allow one to both enjoy their favourite games and not get burned out.

Most gadgets come with a brightness reduction function. While it does make the image clearer and nicer, having it set too high will cause glaring, which strains the eyes and eventually causing damage. Alternatively, there are various mobile apps that can help reduce glaring as well.

What are the Treatments Available for Video Game Vision Syndrome?

One that we recommend is Safe Sight TransPRK, a fully laser, non-invasive and safe procedure that uses the Schwind Amaris 1050RS laser – excimer laser machine that’s equipped with a zero latency eye tracker. As video game vision syndrome has similar symptoms with computer vision syndrome, this treatment is viable.

If you or someone you know are experiencing such symptoms and would like to know more, get in touch with our experts. All of us at Clearvision will be more than happy to help you out.

Do LASIK Surgeons Undergo LASIK themselves?
May 18, 2021